A Beach of Metaphors... 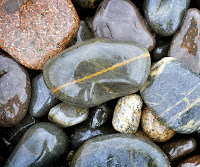 The first day I went to Herring Cove beach on Campobello it was raining but that didn't matter.  I was there to see the stones.  I recalled the first time I had seen these rock beaches over 15 years ago with a friend.  A trained geologist, he offered me the scientific viewpoint of their incredible variation. Then, as now, I marveled at their beauty and diversity but I'm getting ahead of myself.

When I visited the Roosevelt visitor's center earlier in the day, I purchased two books by photographer Brian W. Flynn who summers on Campobello. I was merely killing time before our "tea with Eleanor" was to begin but finding the two books was a gift.  They triggered my memory of those stone beaches and my friend.  The Voices of Stones and The Wisdom of Stones also presented the idea of seeking metaphors on this very unique beach that I, as a contemplative photographer who is always searching for the metaphors contained in the landscape, found compelling.  So, despite the rain, I visited the beach and collected some stones.

But it was clear to me my conversation with this particular landscape was far from over.  A few days later I made my way back to the stone strewn beach with the little books as companions and a mission to complete.

I wanted to commemorate this serendipitous moment of discovery and my pilgrimage "Down East" in some way.  I built a cairn to my friend who first introduced me to these stones all those years ago and who passed away unexpectedly in 2011.  I also wanted to pay tribute to the pilgrim I was trying so hard to become by photographing a feather and a pine cone on one of the stones. 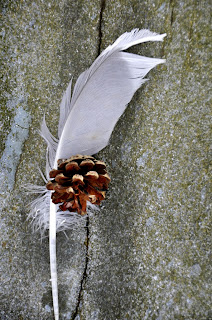 I read about the symbolism of these two objects in a recent post on the Abbey of the Arts blog and the very next day I found them during my travels. (Just another example of the amazing synchronicity that seems to follow me on these trips and which I have now come to expect.  It never fails to appear.)  Here is the excerpt from the post...

"Hildegard described herself as being a "feather on the breath of God" and pilgrimage invites us to notice what we are holding too tightly to, so we might release ourselves into the current of life. The feather was a reminder of the call to surrender whatever it is we grasp onto.
And Hildegard cherished the greening beauty of the world as a living mirror of the capacity for our souls.  The pine cone is a symbol of the new seeds planted in every journey. We go on pilgrimage to be changed, to see the world with eyes of wonder. We don't know the fullness of the journey's impact until
long after." - Christine Valters Paintner

Tomorrow, I will show you a few metaphors I was gifted with the help of Flynn's wonderful books. It was one of many blessings I received on this trip.

Email ThisBlogThis!Share to TwitterShare to FacebookShare to Pinterest
Labels: Metaphors, On Location

Just beautiful and so inspiring. Thank you.

My first reading of your blog today. Thank you from my fluttering heart.

Welcome! So glad to have you visit. Enjoy the journey...