Into Great Silence - a contemplative movie 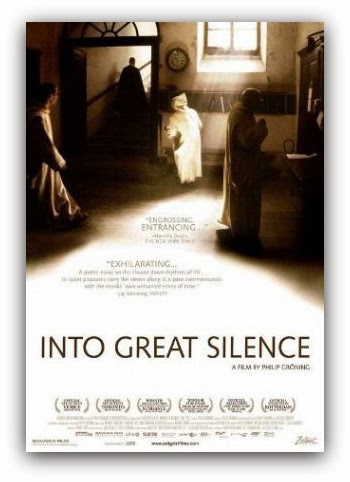 I've been thinking a lot about silence.  In my January 25th post I spoke about practicing the art of silence.  As always, intensely thinking about something usually draws related things to me.  This was the case when I discovered the 2005 movie, Into Great Silence.

I'd never heard of the award winning film until a few days after completing my post on silence.  I guess the Universe wanted me to have a visual encounter to expand my understanding of the concept.  I immediately ordered the film and I was not disappointed.

Now, if you are a person who likes action packed dramas this may not be your kind of film.  It is nearly 2 1/2 hours of beautifully filmed but nearly silent footage.  I think the length of the film is important since it takes time to melt into its contemplative nature.  In the beginning you may find yourself thinking, "OK, when does the story start?"  You have to turn off that mindset.  The "story" here is silence and it doesn't require words, drama or a back story.

The director, Philip Groning, had to wait 16 years for the opportunity to film at the Grand Chartreuse Monastery in France which houses monks of the Carthusian order. (They are world renown for the green liquor that has given it's name to the yellow-green color). Then it was another 5 years of preparation, filming and editing.  Like the monastery itself, "hurry" had no place in the films creation.

What resulted was a glimpse into the silent nature of the monastic experience.  I found myself drifting off into a unique encounter, the likes of which I have never experience with a film. I also found myself pushing the pause button from time to time so I could better savor some of the films exquisite stills.

I was a film making major, along with photography, back in my undergraduate studies, and I could really appreciate the essential beauty of this film.  Now, as a contemplative photographer, I could embrace the concept of silence in a whole new and visual way.  You might like to experience this film because that's what you will do..you don't watch it so much as you feel your way through it.  I found it profoundly captivating.

So, dim the lights, pour yourself a nice hot cup of tea and put your feet up.  Prepare to enter into an experience of simplicity, profundity and, of course, all embracing silence.  It is a contemplative feast for your eyes as well as your soul.  You will wonder where the time went.

This sounds like a film I would like - a taste of monastic life. I need a lot of Silence (meditative Silence, not just silence, although that is needed too :), but I often wonder if I could actually do that - you know, *live* a contemplative life of silence. Will have to see if I can find the film to rent...

I've often wondered the exact same thing. I've stayed in Trappist monastery's for a week at a time and I've had no problem melting into the silence but long term? I don't know. I do know I always come away refreshed.

Thank you, I love these kinds of films where you can just get lost in the artistic content, not so much about the spoken word, will keep this one bookmarked...x

Thank you Susan! I'm sure you will enjoy the very contemplative nature of this film. Do try to get a hold of it.