A Contemplative Look at the Visual Elements - Value 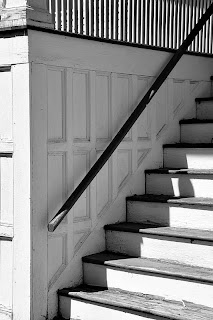 To a photographer that works with the monochrome image, value is perhaps one of the most important of the visual elements.  I remember when I was studying photography we were often, at least in the beginning, encouraged to create the "well balance" image, tonally speaking.  Clean lights, deep blacks and a good range of values in between.  The worst thing you could do is present a "flat" image at critique!  Perish the thought! That idea actually crossed my mind when I photographed these stairs at the Canterbury Shaker village recently.  My, wouldn't my Photography 101 instructor be proud of this!

But the consideration goes far beyond the mere discussion of an arbitrary range of tonality.  Value can have profound effects on how we think of a photograph.  Photographs that use a range of values in the darker tones are called Low Key images; those on the opposite end of the tonal spectrum are referred to as High Key photographs.  I must confess that I prefer low key values most of the time.  I like the dark, velvety tones. 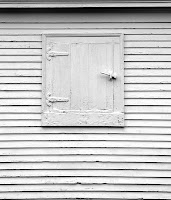 Recently, I've been experimenting with high key images...such as my "white on white" abstraction in the Shaker folio.  I found another such image in Canterbury.   Now, this could be viewed as an incredibly boring photograph by some.  Centralized focal point, repeating linear elements, a real "hohum" kind of photograph.  But in context with the ideas of Shakerism it takes on a whole new meaning and becomes a metaphor for the balanced simple life they lived which sought to obliterate unnecessary detail and ornamentation.  Again, we see that image context is crucial to the interpretation of the photograph.  The Shakers strove for clean, light "high key" environments in an age where heavy, dark, "low key" Victorian interiors were in style.  That contrast says it all.

Value in the color image is a bit more difficult to see since we see the color first then the value but it is every bit as important.  The point here is that all ways of using the concept of value in our images adds to their contemplative potential...simply be aware of how you perceive and react to value.  Do pale, soft values seem ethereal and slightly mysterious?  Or do the dark rich values heighten the mysterious for you?  Again, this is not a "one shoe fits all" sort of thing.  In understanding how you react to value, you can begin to understand yourself.