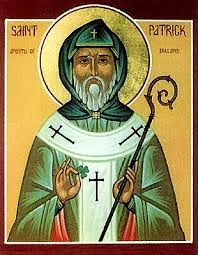 Top of the morning to you!  It is, of course, the feast day of the patron saint of Ireland, Patrick.  For some it means green beer and parades.  A happy, song filled day.  Many people are also familiar with some of the legends of St. Patrick, like how he used the wee shamrock to teach the concept of the holy trinity, central to the Christian faith, to the newly converted Irish.

But, are you aware that he is also the patron saint of the enslaved?  Patrick was, himself, held as a slave in Ireland for many years before escaping and returning to England.  He later returned to the place of his enslavement to preach and convert those who had enslaved him.

I am telling you this to remind you that slavery still exists in the world today, even in the United States.  The black market trade in human beings is not something people like to imagine happening in our culture but it does. In fact, right now there are 60,000 enslaved people in the US but that is just the tip of the iceberg.  Here is a link will help you understand the problem on a world-wide scale:

Slavery in the World Today

There are organizations working on this that you may like to look into, like Walk Free, which is trying to end the trade in human beings and make modern slavery a thing of the past.  It will take all of us, forging links of compassion, to finally break the chains of slavery for those who have no voice. 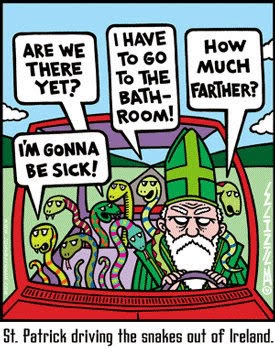 To end this post on a lighter note, I want to offer you the myth of St. Patrick driving the snakes out of Ireland.

This more than likely refers to Patrick supplanting the pagan faith he found in Ireland with the new faith of Christianity but it is true that there are no snakes in Ireland.

A snakeless Ireland is probably due to the ice age rather than Patrick.  If you want to find out why, you can visit the National Geographic link here.

Another thing Ireland is known for is their wonderful and pithy sayings.  Here's one I especially like:


There is no use carrying an umbrella
if you have holes in your shoes.

I'll try to remember that when I'm in Ireland in May!

Thanks for sharing the connection to slavery, Patricia, however difficult it is to face. It's a great reminder, and I love the idea of using this day to call us to be patrons of and advocates for the enslaved, too.

PS: Ireland is lovely and awaiting your arrival!

Yes, it is not an easy topic but a necessary one. I hope you are having a wonderful time in Ireland and I look forward to my trip. Thanks for your comments.