The Heart of the World... 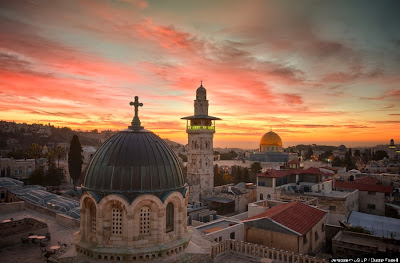 I was very fortunate to be able to see the exhibition of the Dead Sea Scrolls at the Museum of Science in Boston recently.  While the exhibit was excellent - they  recreated a part of the Western wall (even using one of the actual stone) where people could leave prayer messages in the cracks, as they do in Jerusalem - it was the Imax movie that accompanied the exhibit that took my breath away.

Created by National Geographic, the film attempted to illustrate why people regard Jerusalem as the "heart of the world"; where three great religions, Christianity, Judaism, and Islam overlap.  It was a stunningly beautiful virtual tour of the old city, within the walls that define one square mile of sacred space.

As much as I wish I could travel to Jerusalem, it is, after all, the ultimate pilgrimage, I doubt I will be making the trip anytime soon.  This film was the next best thing.  It got me thinking about the conflicts that rage in this part of the world.  When you leave the film, which tells the story through three young girls of the different faiths, you find yourself puzzling over how religions who have so much in common can be the cause of so much hate and violence.  This is truly a contemplative film.

You can watch the trailer to the film below and you can see if it will be playing in a theater near to you.  I recommend you see it if you can.

The Heart of the World- Jerusalem

Email ThisBlogThis!Share to TwitterShare to FacebookShare to Pinterest
Labels: Traveling with a Pilgrim's Heart