It's funny how we tend to overlook the near at hand in favor of the faraway and exotic.  Star Island is one of those near to hand places I've known about for years but just never got to.  In this year of exploring the nearby, it was time for me to head to Portsmouth, New Hampshire and take the ferry out to Star Island in the Isles of Shoals.

I had first come to know about Star Island and its surrounding islands through the writings of Ceilia Thaxter who lived on Appledore Island.  Thaxter was a poet and compatriot of many notable 19th century writers and artists.  With her friend Childe Hassam, a Boston painter, she wrote and illustrated An Island Garden, which still sits on my bookshelf, having survived my winter purge of no longer needed books.  Hassam's paintings, masterpieces of American Impressionism, have long been favorites of mine. 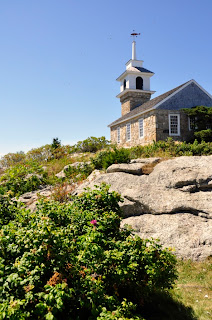 Appledore would have to wait for I was headed to Star Island.  Although I wouldn't see her garden, there is a museum of her writing and life on Star Island so I was content with that.  I caught the morning ferry in Portsmouth Harbor.  It is an hour ferry ride and as the little boat pulled away from the dock, you could feel the separation begin.  That is one of the main reasons I love journeying to islands, despite my tendency to suffer from the mal de mer! You literally turn your back to the world and venture to a self-contained sanctuary and retreat.  People have been seeking this sanctuary on Star Island for nearly 250 years.

Here is a link to the Star Island website.  You might just want to put a visit on your "bucket list".  It certainly is one of those special places in New England and for the contemplative photographer, it is an amazing experience.  Some more images and impressions of the  place tomorrow...


Star Island in the Isles of Shoals