I think the one major "take away" from the two photographic retreats I attended last month, one in New Jersey and one in Kentucky, is that there are basically two ways to approach the photographic medium.  You can approach it with a mindset, which is to say, a cerebral bent or you can approach it with a heartset, which uses a more heart-centered tack.  It is another way of describing a left brain/right brain duality.  Neither approach is "wrong" but each approach appeals, or not, to different people.  The simple fact of it is, we can learn from each other and our images will improve accordingly. 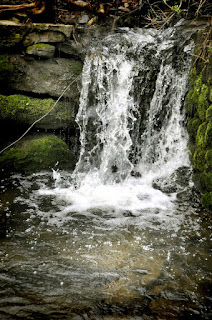 My first retreat was populated by people for whom technical considerations were paramount...equipment, lenses, processing techniques, you get the picture.  I listen politely, you can always learn something, but pretty much kept my contemplative thoughts to myself.  That is, until someone began talking about a photographer whose approach to teaching had a sort of boot camp/survival of the fittest mentality.  On the first day he gave each person a box of camera parts and told them to "put it together"!  The thought was, if you could do it you really deserved to be in this large format workshop.  Frankly, I was appalled.  I've never been a proponent of teaching by torture.

The workshop in Kentucky was entirely different.  No one compared equipment or even talked about the "hardware".  It was all about perception and the "whys" of the photographic process, not the "hows".  I felt right at home with this group of people, needless to say.  Personally, I like a blend of both approaches; I want my images to look as good as they can be but, in the finally analysis, it is the content that matters most to me. Mindset photographers can, in the extreme, be a bit elitist.  Heartset photographers tend to be more egalitarian.  I can imagine what the first group in New Jersey would have said if I'd whipped out my I-Phone when we went to photograph at the Zimmerman farm as they assembled their (very expensive) large format box cameras!

Every photographer, at some point, must come to terms with this duality of approaches (and this also applies to the processing of the image as well.)  Do the technical considerations override the contextual?  As one who tries to follow a Taoist approach in life I'd say, take the middle ground but follow the path that suits you best.  Just because you are following a different path doesn't mean you are lost!


Posted by Patricia Turner at 7:35 AM

Email ThisBlogThis!Share to TwitterShare to FacebookShare to Pinterest
Labels: Food for Thought