It's a Matter of Life and Death... 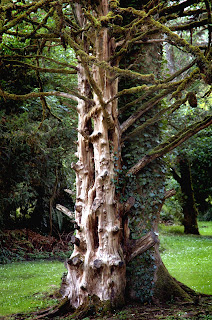 When I came across these two trees I stood and looked at them for quite awhile.  They probably sprouted at the same time, since they are of a similar size, and grew up side by side.  At some point, the tree on the left died but the tree on the right continued to grow.  These trees are on the grounds of Cong Abbey in Ireland.  The well tended landscape was a pleasure to walk through and I silently thanked the grounds keeper for not cutting down the dead tree.

Instead of falling over, the dead tree has remained upright, perhaps supported by its cousin, becoming a haven for woodpeckers and squirrels.  In its death it became a home for the living.  The living tree is beginning to wrap around its dead cousin and the ivy will soon enclose it.  It made me think of a phrase...


Here, in this image, it is literally true.  I cherish these moments when the metaphors ring so true and so clearly.  You don't have to dig too deeply to appreciate the message.  It is hidden in plain sight! The light was wonderful too.  The sunlight illuminated the dead tree while the living tree is the one in deep shadow...opposite of what you might suppose it should be.  And in the light there is also another form of illumination.  Death here is not seen as an end but a beginning of a new form of existence and isn't that a wonderful way to look at it.

Posted by Patricia Turner at 7:56 AM