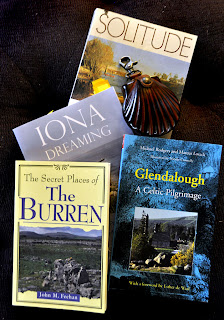 In early May of 2014 I will embark on a month long journey to Scotland and Ireland.  I will visit three "thin places" each chosen to represent a facet of my life that is in transition. This is a journey I have wanted to  take for some time now and I want to savor every moment of it...even before I embark.

Initially, I had not planned to begin writing about this until next year but I've discovered that even in these early stages of preparation I am experiencing some interesting and serendipitous occurrences that you may find illuminating.  Mainly, I want you to see how pilgrimage begins long before the actual trip and many things go into the process.

I have written extensively about traveling with a pilgrim's heart (you can re-read those posts here...).  I try to travel with intention wherever I go be it near to home or half way around the world.  But this trip would be different I felt and it was different from the very, very beginning.

I will start with the first bit of serendipity/synchronicity which was what got me thinking of making this pilgrimage in the first place.  I guess you could say it began with a conversation and a passage of writing by John O'Donohue, who I always find inspirational on so many levels.  I came across this passage right after I had had a revealing and thought provoking conversation earlier this year with a friend about my turning 65 next year. (The emphasized parts are what resonated most with me after our conversation about specific turning points in ones life and how we face them...)


“Like spring secretly at work within the heart of winter, below the surface of our lives huge changes are in fermentation. We never suspect a thing. Then when the grip of some long-enduring winter mentality begins to loosen, we find ourselves vulnerable to a flourish of possibility and we are suddenly negotiating the challenge of a threshold. At any time you can ask yourself: At which threshold am I now standing? At this time in my life, what am I leaving? Where am I about to enter? What is preventing me from crossing my next threshold? What gift would enable me to do it? A threshold is not a simple boundary; it is a frontier that divides two different territories, rhythms, and atmospheres. Indeed, it is a lovely testimony to the fullness and integrity of an experience or a stage of life that it intensifies toward the end into a real frontier that cannot be crossed without the heart being passionately engaged and woken up. At this threshold a great complexity of emotion comes alive: confusion, fear, excitement, sadness, hope. This is one of the reasons such vital crossings were always clothed in ritual. It is wise in your own life to be able to recognize and acknowledge the key thresholds; to take your time; to feel all the varieties of presence that accrue there; to listen inward with complete attention until you hear the inner voice calling you forward. The time has come to cross.”


It came into my mind that a pilgrimage, a "threshold" pilgrimage was in order for next year but to where?  What was the threshold to be crossed?  Was there, in fact, more than one threshold?  As he said in the above passage, What am I leaving?  Where am I about to enter?

John had been a priest for over 18 years when he left to pursue his writing and lecturing full time.  That must have been a tremendous threshold for him to cross.  My transition from full time teacher to full time contemplative photographer and blogger has also been a major transition for me.  I would need to think carefully about all this but one thing was certain.  I knew that I would return to Western Ireland, my hearts home and my spirits place of rest...at least for part of the time.

Since this whole idea began with John O'Donohue, I thought that the Burren would be the logical first part of the pilgrimage.  I longed to return to "John's house" in Ballyvaughan on the shores of Galway Bay but that would entail finding people to share the house expense.  Initial feelers to friends and family came up empty handed.  Perhaps I'd just find a little B&B instead, I thought.

However, the serendipity was just beginning.  Things were at work, it seemed, that would shape my pilgrimage and all I had to do was keep an open heart and follow where it led me.  If I was meant to be in Ballyvaughan then there I would be.   In the next post on my threshold pilgrimage, in early January, I will talk about the second bit of serendipity...

Email ThisBlogThis!Share to TwitterShare to FacebookShare to Pinterest
Labels: My Threshold Pilgrimage

I find the *idea* of "pilgrimage" fascinating, and how interesting that I too find myself on the "threshold", which I will post on the Winter Solstice (21st)! I am not able to travel, due to health considerations, but I still have felt the "call" to "pilgrimage" since this Summer. It seems it will be an inner pilgrimage of the Heart - finding that deep inner Rhythm again. But I am being open to where it might lead. Your post is so timely!

Love the quote from John O'Donohue and the questions, one's which I am beginning to ask myself. And I was struck by the line: "that cannot be crossed without the heart being passionately engaged and woken up." I feel that too!

Looking forward to reading the link you provided about traveling with a pilgrim's heart and future posts as you embark on this wonderful adventure of Life!

Pilgrimage is a "heart thing" and doesn't necessarily involve travel. You can travel with intention in your own home town...in your own back yard! I so enjoy your comments and thank you for taking the time and thought to write them. I'm glad you, and so many others through this blog, will be traveling with me next year. I will keep you all in my heart.

Patricia. This is so intriguing and I look forward to reading more. I relate so well to what you are saying about pilgrimages and thresholds. They are mysterious things that unfold with synchronicity. I so wish I could have joined you in Ireland but perhaps another year. My pilgrimage will be to Newfoundland next June - long anticipated.

If Ireland is calling to you you will answer that call someday. It is an enchanting place to be sure.