From Here to There and Back Again... 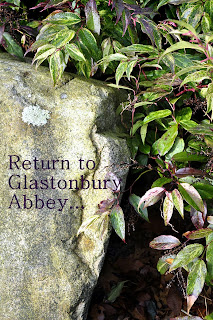 I began this year with a New Years retreat at Glastonbury Abbey in Hingham, Massachusetts.  I chose my word for 2013, PATHWAYS, as I walked the Abbey labyrinth in late December.  It's been a wonderful and enriching year as I meditated on the various ways I walk through the world.

On December 7th I returned to Glastonbury Abbey to attend an Advent event.  I've come full circle.  I decided to again let the Abbey grounds inspire my word choice for 2014.

I had several words percolating in my mind the past several weeks but as I walked during a time set aside for quiet reflection, I came to a part of the property I hadn't visited the first time.  There was the answer, illuminated in the soft and slanted December light - THRESHOLD.  It seemed so appropriate.

With my pilgrimage to sacred sites in Ireland and Scotland in May next year which I had already named (see the first post here...) it was clear that the word Threshold should be my focus for the entire year, not just for the month long trip.  There are so many ways you can think about the concept of a threshold.  I know it will sustain me for a full twelve months.

At the end of the presentation, I spoke to the woman who had led the event.  She said she had seen me photographing the stone sculpture.  She and her husband had actually donated the stone to the abbey!  In the warm months, streams of water fill the opening.  I will definitely come back to photograph the water feature next year.  I thought it was a lovely connection and made my choice seem even more special.

I encourage all of you to think about choosing a word for 2014, or let the word choose you in some way as I did at the Abbey.  You can make it your annual year end ritual.  My path began at Glastonbury Abbey but it doesn't end here.  I pass through, cross over a new threshold into a new year and a new adventure.  I hope you can join with me in 2014 to see where it all  will lead.

I look forward to seeing how your word - threshold - unfolds for you in your travels next year, Patricia.

Me too, Kim! isn't anticipation a wonderful thing?