Thanks to a comment on this blog, I was introduced to a new book and I've found it fascinating.  It is called A Mapmaker's Dream by James Cowan.  It is an historical fiction based on the writings of a real Venetian monk, Fra Mauro who created a map solely from other peoples descriptions of places to which they had traveled.  Without ever leaving his cell, Fra Mauro created a map of the imagination.


"With the help of others I have completed the world.
It now has a form that is both physical and - dare I say it? -
immaterial at once.  Perhaps, yes, even mystical." - page 147

This book made me think about the hidden, largely unknown, inner landscape of the human soul.  In contemplative photography we seek metaphor in the world around us to better understand this interior world.  I believe Fra Mauro did the same thing but instead of making photographs he made a map.

The story also called to mind the ancient maps I had seen that included the phrase, "Here be dragons" for the place that existed at the edge of the known world.  Venture there at your own peril!  Don't we all have such places on the map we carry in our hearts...places we seek to avoid at all costs?

For it is true, we all have a kind of interior map which is not so much a picture of the known world but an imaginative rendering of our desired world...our created realities.  We come to know this world - and create our maps - through our response to places, people, and things in our lives.  It is through the wonderful vehicle of the photographic image we can gain insight into the shape and contours of this inner landscape.

Cowan describes  Fra Mauro's striving to create this map of imagination and I can think of no more fitting description of the contemplative photographer... 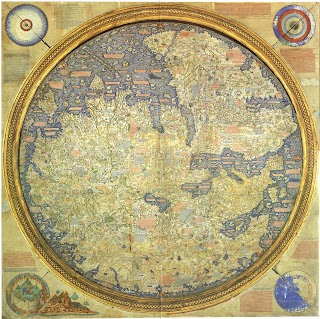 "His (Fra Mauro) dream is to derive meanings from the perfect use of mystery.  Each place that he evokes becomes a symbol.  Little by little he tries to evoke a country, and entire world, in order to reveal a frame of mind.  In doing
so he often chooses a piece of information, a mere fact sometimes, with the object of causing a new state of mind to emerge.  He is trying to encourage a process of unlimited deciphering, as if these facts are but the tip of an iceberg.  He is asking us to dispense with the ice floe of appearances and plunge ever deeper below its surface." - Introduction

The map spoken of in the book has, sadly, been lost to us but the one on the right is a surviving example of Fra Mauro's work.  He places South at the top which is more in keeping with Muslim maps of the time and I love the idea of turning the world upside down!  It is incredibly rich in detail and annotation but his lost map of his imaginings resonates more with my contemplative soul...


"The world you are looking for," the astronomer expounded, "includes many things
whose existence most people doubt.  That is because they are expecting those
things to conform to what they already know.  The world I am talking about has been
created to reflect each person's deepest image of himself.  It follows that wise
men contemplate the world, knowing full well that they are
contemplating themselves."  - page 134-135

The same could be said of the contemplative photographer....
Posted by Patricia Turner at 8:12 AM

Email ThisBlogThis!Share to TwitterShare to FacebookShare to Pinterest
Labels: Self Culture