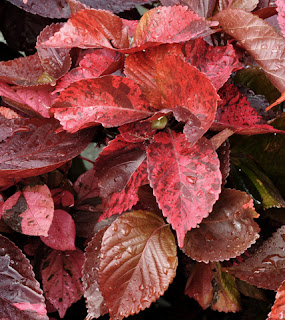 I have loved the poetry of Rumi for some time.  What Shakespeare is for the English language, Rumi is for the Islamic world but like Shakespeare, his writing transcends culture, becoming more universal truth than ideology.

Jelauddin Rumi was born in what is now Afghanistan in the 13th century.  He lived most of his life, however, in Konya, Turkey which was a place of convergence for many cultures being, as it was, at the edge of the Silk Road.  Muslim, Christian, Hindu, and even Buddhist travelers met there and shared ideas.  It is this blending of thought, I feel, that gave Rumi's work its universal appeal and which still inspires us today.

In this post I would like to point out the possibility of photographic inspiration from less than obvious sources.  In this case, the poetry of a 13th century Sufi mystic. He extolled his readers to listen with what he called "the ear in the center of the chest." Wise advise for the contemplative photographer.


Red with shyness, the red that became all the rose garden reds.
The red distance, Red of the stove, and the boiling water.
Red of the mountain turning blood red now.  Mountain holding rubies secretly inside, should I love more you or your modesty?

I have never thought of red in any of those terms.  Color is color I thought but Rumi asks us to see it with different eyes.  To see red with a passionate engagement.  My photograph above was made last year on St. John.  I had begun to work in color more consistently the year before on South Uist but on St. John the color spoke to me in a whole new way.  Perhaps it was the Caribbean light, so different from my own subdued New England light, that made me see color differently.  When I read this poem by Rumi I felt that I would never see color, any color, the same way again.  The whole idea of the psychology of color, an individuals response to it, its inherent emotive qualities, opens a  new dimension for the contemplative photographer and got me looking at this man's wonderful poetry in a new way as well.   Hopefully you to will be encouraged to seek inspiration for your work in new and unexpected places.

Email ThisBlogThis!Share to TwitterShare to FacebookShare to Pinterest
Labels: Inspired by...