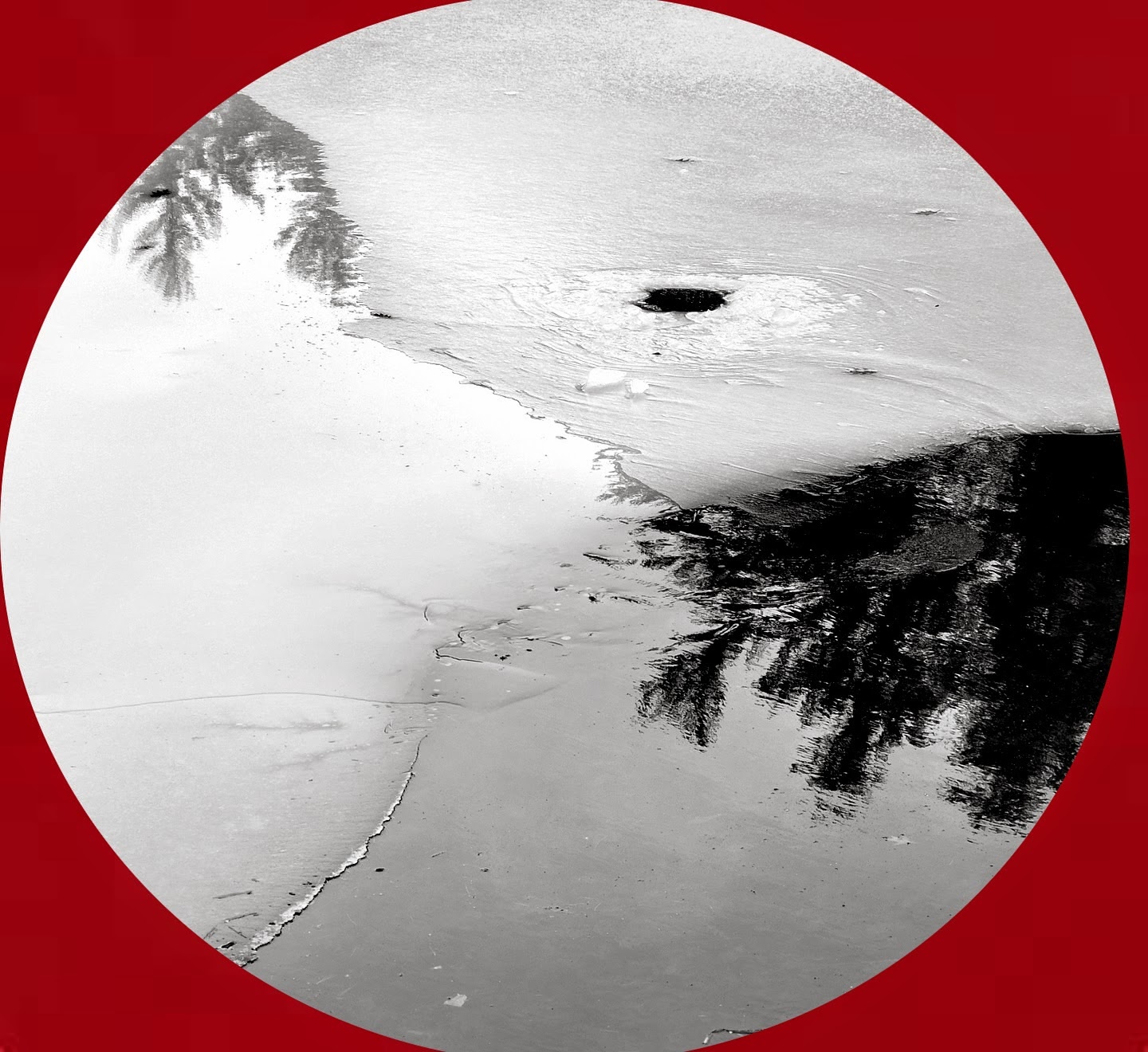 I couldn't help but see this juncture of frozen and liquid at the pond in terms of the Taoist Yin/Yang symbol.  It even had a circle in it!

The pond really treated me this day to a stunning display.  The heavy rains the day before left a thin layer of water on parts of the ice while this shore edge segment also had an unfrozen patch but the energy wasn't in these segments, it literally flowed over the surface. 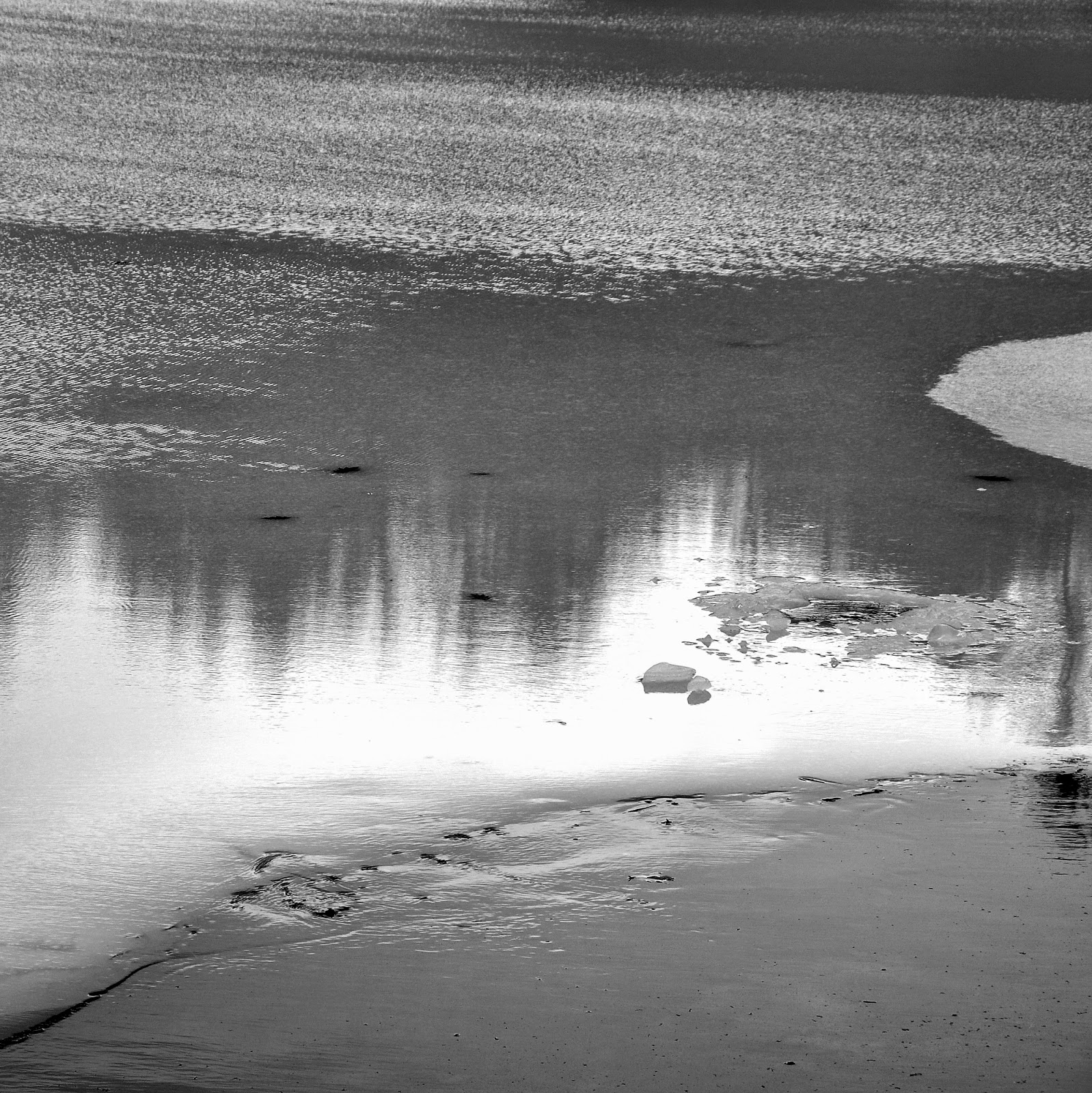 The wind was quite brisk, out of the north-east and caused a shimmering transformation to race over the surface. Tiny ripples danced across the water and I stood there quite mesmerized despite the frigid temperatures.  This wouldn't last, I was quite sure of that.  I made the following four photographs in less than three seconds. 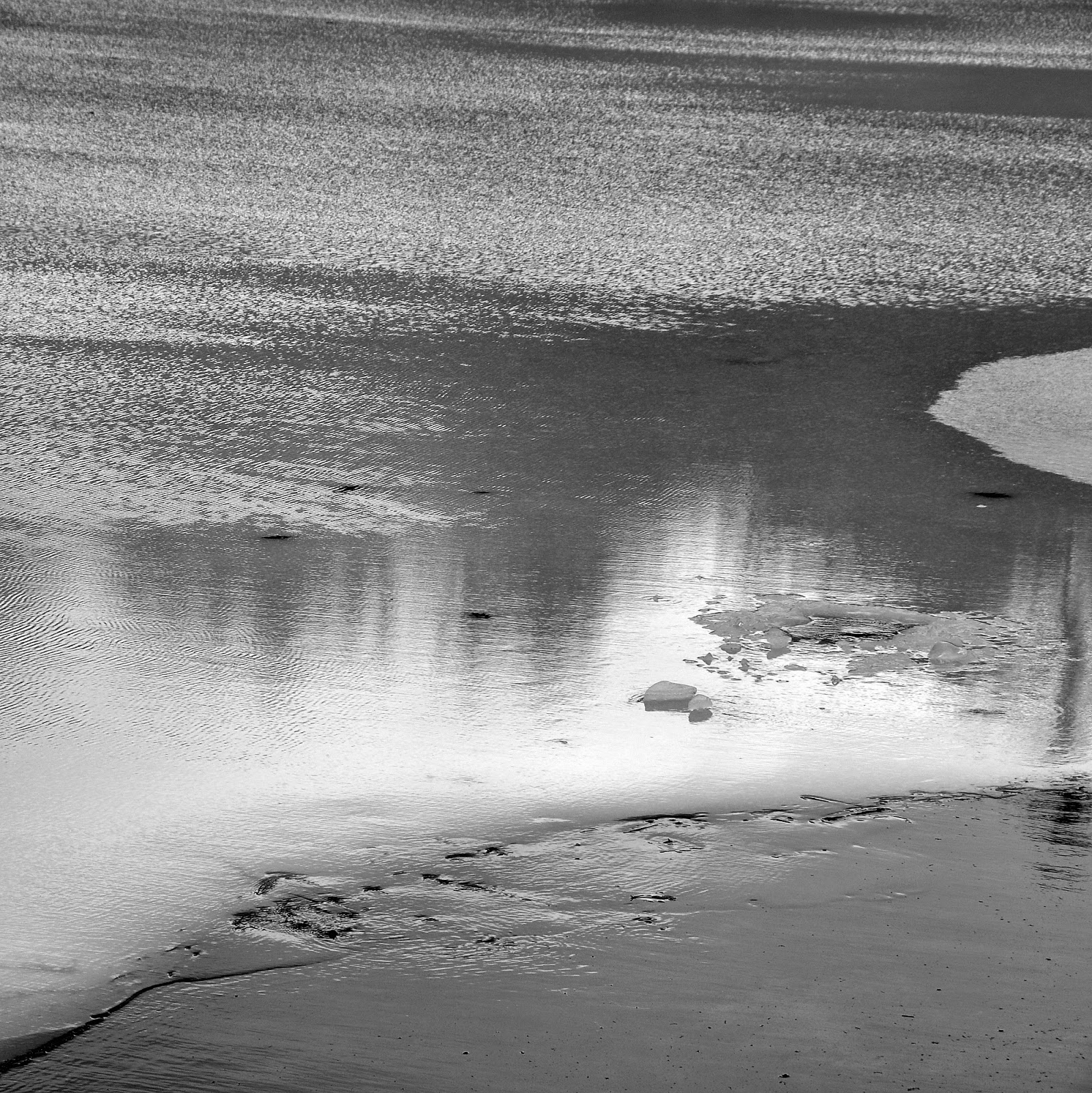 Now, you are probably asking yourself the same thing I asked myself as I drove away..."Why didn't you make a video of this?"  Good question. I should have turned around right there and then and made the video.  Perhaps the effect would have been more dramatic
than these four still images.

I was on the way to the post office and I had to catch them before they closed for lunch.  Yes, here in my little village, the post office closes for one hour at lunch time.  "I'll stop on my way back", I thought. 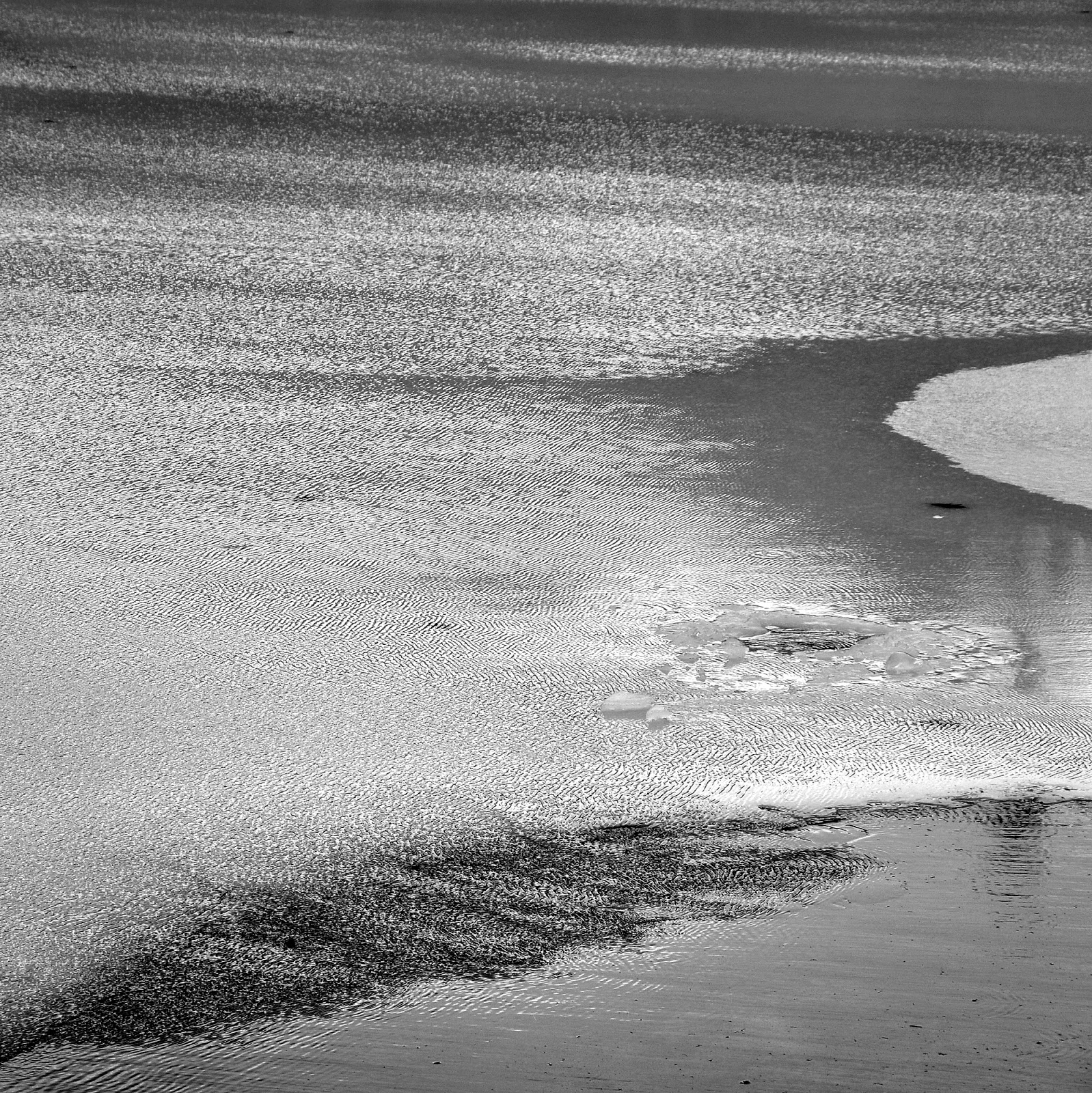 Only when I drove back less than one half hour later the pond was already starting to "stiffen up" as they say.  The effect was no longer there.  The pond had gone from mirror to a heavily textured and shimmering surface, the ripples spilling into the open patch of water directly in front of me.  It was much more beautiful than these four photographs depict.  I guess it is one of those "you had to be there..." moments. 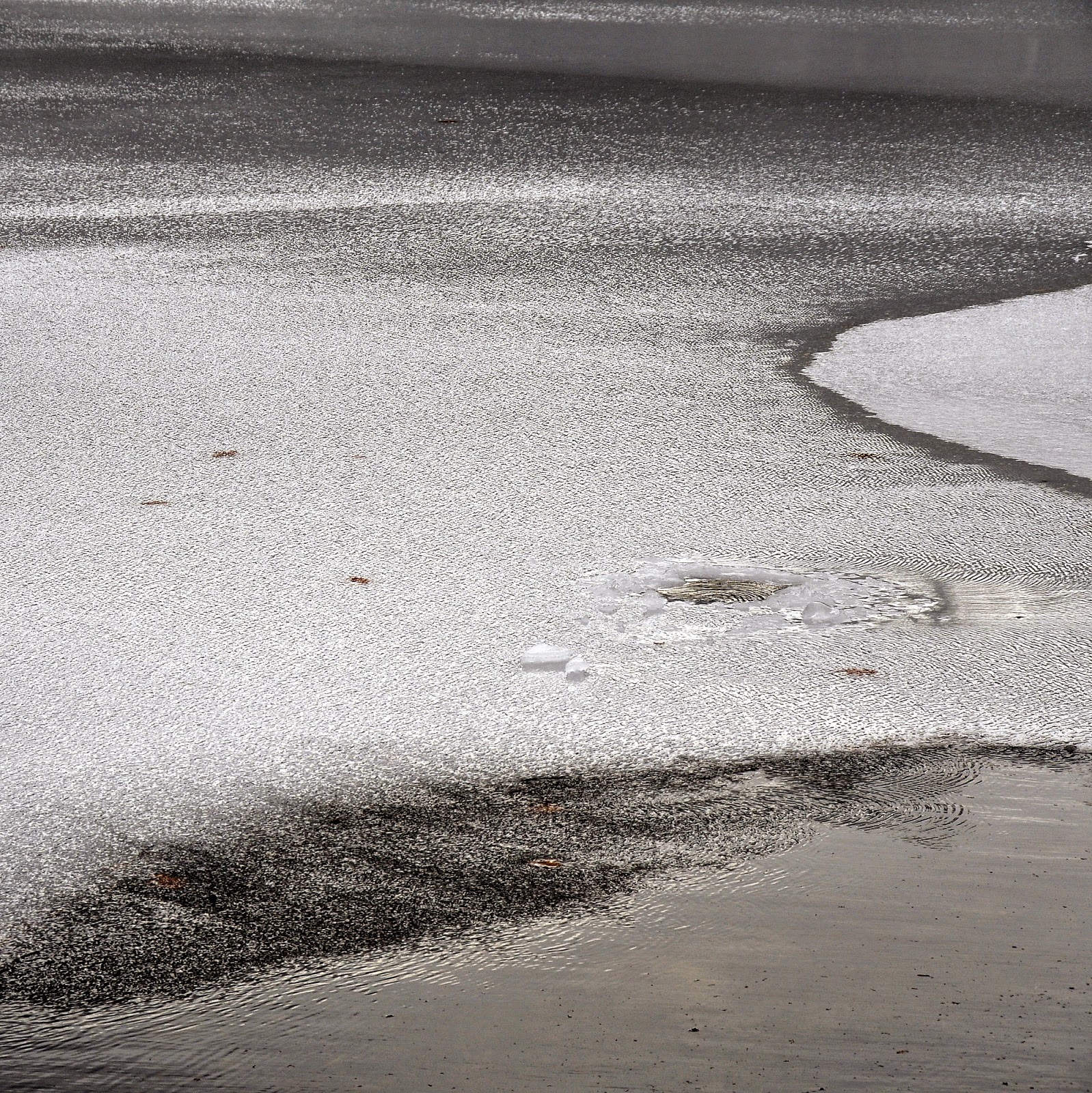 Anyway, the lesson is clear, don't wait. Don't let things distract you... stay immersed in the moment.  It also shows how fleeting these kinds of moments are in the landscape. Here one moment and gone the next.  The wind would stop and the surface returned to it's mirror-like appearance. All the more reason to visited a place frequently.

I now bring my camera with me every time I go into town and have to pass the pond. I stop nearly every day. Perhaps it is the fascination I have with this place but I know that on any given day, at any given moment in fact, this place will offer me a new window into its soul.  I am never disappointed except when I don't take the time for it to work it's magic on me.  Lesson learned...

The contrast which the Taoist yin/yang symbol illustrates is ever present at the pond...especially this day.  The still/moving, light/dark, open/closed, smooth/rough...it was all happening simultaneously.  I had seen, of course, the wind rippling the water before but this day it seemed to be creating new compositions on the ice.  Moving water over the ice was a very dramatic effect.  The next day the pond had frozen over and the poetry had changed yet again.

In regards to photography, I have learned that if I see something that touches my heart, I need to capture the photo right then. If I do not, then either the light has changed or what touched my heart no longer resonates as it did earlier.

You are so right Cheryl. That wonderful moment on the pond was transitory, fleeting. I'm glad I have these four images to remember it by.