In Praise of Celtic Pathways...

"In conversation they speak in
riddles, for the most part hinting
of things and leaving a great deal
to be understood."

I have been drawn to the ancient Celtic world for as long as I can remember.  I blame by father, in part, for this fascination.  Although of a solid Polish/Russian ancestry, my father chose, for unclear reasons, to change is rather cumbersome Slavic surname to "Sullivan".  With no Irish ancestry at all I was, nonetheless, obliged to carry this ill fitting pseudonym.   But what once felt false now feels more fitting given my love of Western Ireland and Celtic Spirituality.

In my post, "The Path We are On" (January 3, 2013), I spoke about the trepidations in following a given path.  "Pathways" is another of those universal metaphors and it is the word I've chosen for 2013...one I'll reflect on during this coming year.  Choosing a word-guide for the year is something I learned at Abbey of the Arts. (And if you haven't visited Abbey of the Arts, you really should.  There is a link in the side bar.)  Well, strictly speaking, you don't so much choose the word as you allow the word to choose you and "Pathways" chose me!

Now, some people may see pathways as having a beginning and an end and a clear destination but I take a more Celtic approach.  For me they are constantly twisting and curving, like the Celtic knot design, having no starting or ending point. We each approach our pathways differently and for me it has been through the study of Taoism and Celtic Spirituality.  I've written a great deal about Taoism's connection to my contemplative photography but now I wish to speak about the Celtic influence. 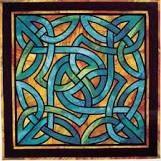 " The Celtic world is a world that favors
poetry before philosophy, mysticism before
theology and magic before logic.  Storytelling
matters more than the ability to explain something
in dry, step-by-step detail.  The Celts are, and
always have been, a people with one foot
in the otherworld..."

All of this, at least for me, relates very nicely to my style of contemplative photography.  I want my photographs to hint at essential truths but never attempt to explain them, leaving the understanding up to the individual viewer, an understanding that may evolve over time.  I want my images to be more a poetic metaphor that a concrete statement of reality....things are always far more complex and infinitely richer than they may seem superficially.  But I think what most influences my thoughts on contemplative photography is the Celtic belief in the dynamic, living landscape; a landscape which invites you into dialogue; a landscape that is an active teacher and co-creator.

At my retreat at Glastonbury Abbey over the New Year, I attended prayers with the monks many times.  It was a lovely, quieting experience but I think, for me, the Divine is more easily accessible in Nature than within doors...and that is a very Celtic sentiment.  The landscape is Divine presence and with the pull and push of the seasons, the ebb and flow of the tides, with the inhale and exhale of the wind, that presence is very palpable.  I hope to spend a great deal of time this year in the living, breathing landscape and I am sure it will have much to reveal to me.

Posted by Patricia Turner at 7:47 AM

Email ThisBlogThis!Share to TwitterShare to FacebookShare to Pinterest
Labels: In Praise of...