The Characteristics of a Photographic Sage - part VI: "Non-attachment"

"The best way to go into unknown territory
is to go in ignorant." - Dorothea Lange

This is one characteristic that I have the most trouble with...I get very attached to subjects and to places!  But being passionate about your art doesn't mean being so obsessed with it that you can't put it aside when the time comes...as it inevitably will.  Knowing when to "walk away" is healthy and surprisingly invigorating. Every once in awhile one has to wipe the slate clean and begin again. Over the past 7 years I have done it several times and it has always brought surprising results.

When I was in the Hebrides in 2005 I spent most of my time photographing the land and details within the landscape. Once I had released my attachment to Paul Strand, I was able to see things with fresh eyes.  One thing that caught my attention, because I allowed myself to be open to new possibilities, was the prevalence of white horses. For the next 4 years, in Ireland as well as Scotland, I pursued my "Celtic Horse" images. I was fascinated by the mythology as well as the beautiful sculptural forms these creatures had.  Then, it was time to let it go.  This past summer on South Uist I didn't make one detail study of a horse.  I saw them, of course, but I was no longer attached to the idea of photographing them.
This allowed me to pay more attention to the land itself and, most particularly, the amazing skies. This led to a series called "Hebridean Skies" and THAT led to 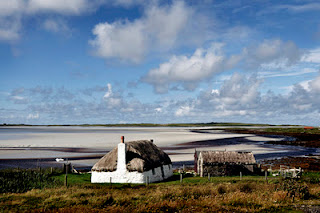 having  the photograph on the right chosen for the
February edition of Scottish Life Magazine!

I also had to "let go" of another attachment on that trip....portraits. I had come to South Uist to do portraits. After the successful exhibit and companion book, First Person Rural: a portrait of a Maine town, I thought, "Why not do the same thing on South Uist?" But the land and circumstances had other plans. Thankfully, I listened to what the land was telling me and the Hebridean Skies series was created.


He who defines himself
can't know who he really is...
He who clings to his work
will create nothing that endures.
If you want to accord with the Tao,
just do your job, then let go.
Tao te Ching - 24

Part of your "job" as a photographer is to construct meaningful series or projects that allow you to fully explore a subject or location.  All artists in all mediums work this way. Knowing when to let it be finished is an important part of the job as well.

There is a great sense of closure at the end of a project.  Rural Geometry was one such project.  I'd worked on it for 6 years and this past December held an exhibition of the resulting images. It was done.  I'd learned a lot from that project and I wonder how I will approach the architecture of Paris this summer?  Hopefully with refined but fresh eyes.

This non-attachment led me to create my favorite sky image at Loch Bee on South Uist. I had heard of the famous mute swans that live on the loch and went day after day in the hopes of seeing them.  That persistence did not result in any swans but the loch had other lessons to teach. 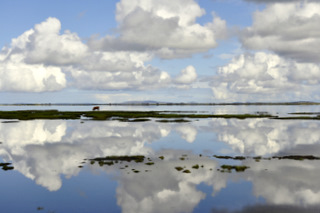 "Sometimes I get to places just when God's ready to have someone click the shutter."
- Ansel Adams

That's exactly how I felt when I came upon this sight!  Even the tiny cow seemed heaven sent! It gave a sense of scale to the amazing clouds.
This photograph could also be an illustration of an important element of Taoist philosophy.  Earth is but a reflection of Heaven...What is above is also below.

Now A Little Practice for the Week:

Look around your town, your neighborhood, even your own backyard and see if you can discover a series there.  It might be returning many times to photograph a place in all different lights and in all different weather. (Think Monet and his haystacks). I once heard of a woman who decided to photograph her house from the viewpoint of her cat!  Try to stay unattached to preconceptions - don't fall back onto the tried and true imagery of the past.  Most importantly, give yourself a time limit...a month, a week, even an hour...it doesn't matter.  What does matter is you throw yourself totally into the project.  Keep a journal, reflect on the images you are making, explore new possibilities then - LET IT GO!
Posted by Patricia Turner at 8:02 AM

Email ThisBlogThis!Share to TwitterShare to FacebookShare to Pinterest
Labels: Characteristics of a Photographic Sage

Congrats on the Hebrides photo to be published in Scottish Life Magazine! Not surprised with such great photos. Also love the videos you're posting.