Reflections on the Tao - II 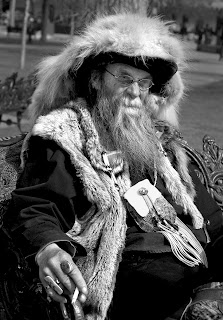 He who knows that enough is enough
will always have enough. - Lao Tzu

Once, when I was photographing in Santa Fe, I came across a very interesting scene. The man who was sitting on a bench (waiting for his wife to come out of CVS believe it or not) was such an appealing subject. The man I was with spent quite a bit of time fumbling in his camera bag...a great internal debate going on about what lens would be appropriate and whether he should go back to the car for his tripod (which, in fact, he did).

I, on the other hand, only had my camera with its one lens so I didn't have any other options.  I asked the man if he minded if I photographed him and he said that it was quite alright.  I made this photograph as his wife came out of the store.  He got up to leave just as my friend came around the corner...too late.

Now I have no problem with having multiple lenses and tripods.  There were plenty of times I had wished for a macro or a more powerful zoom lens.  So, you might ask, why then don't you?  The answer is quite simple.  What I have, an 18-200 zoom, has always been enough for me.  I don't want the burden of all that equipment, physically and psychologically.  Oh, back in 2005 when I began this photographic odyssey, I was way more "equipped".   But after awhile, each time that I embarked on another trip I left more equipment at home. It seemed to be getting in the way of my interaction with the landscape somehow. I'm now toying with the idea of getting a smaller and lighter camera than my Nikon D90.  Perhaps, one day, I won't feel the need to take a camera at all!

Some photographers (not contemplative ones!) often spend a great deal of time bemoaning the fact that had they had the "right" lens, or a tripod, or if the light had been better, they would have gotten a perfect photograph.  I say, spend less time thinking about the equipment and more time embracing the moment...establishing a relationship, a connection, with the landscape or whatever it is you are photographing. Rainy days have as much to teach us as sunny ones...perhaps even more.  I made my image of this wonderful mountain man...my friend, with all his fancy equipment, did not.

Email ThisBlogThis!Share to TwitterShare to FacebookShare to Pinterest
Labels: Reflections on the Tao

Patricia, I love this post. And agree...that one lense - whatever lense that is - encourages contemplation over fiddling...and that is such a gift to ourselves! Stacey

Thank you Stacey. Yes, just having the one lens has made things so much easier and assures that I am really contemplating the scene in front of me an not just seeing it as a photographic challenge to be mastered.