A Contemplative Look at the Visual Elements - Space 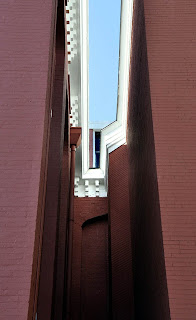 The visual element that most new photographers have the greatest difficulty with, is space.  We are so conscious of photographing objects that we often overlook the space between.  But it is this "empty" space that is often the most telling and evocative and in Taoism, it has great meaning.

I first began to seriously think about space when I read a book by John O'Donohue called, To Bless the Space Between Us. It was his last book, published a few months after his death in 2008.  John understood this "in between space", not as empty but as charged with meaning and potential.  The book wasn't about photography of course but it set me to looking at contained space and this "in betweeness".

I even named one of my photographs I made on the Burren in 2007 in honor of John.  Blessing the Space Between,on the right, recognizes and pays tribute to the beauty and power of these in between places.

Next time you are out photographing, spend some time looking for these in between places.  Try to see it as potentiality and not emptiness.  Find out what blessings it holds for you.

As every good physicist knows, there is no such thing as truly "empty" space.  I'll explore this topic tomorrow in a post entitled, Staring into the Void.  It is a subject that holds a great potential for the contemplative photographer.