On Location - Down East Maine, Pembroke 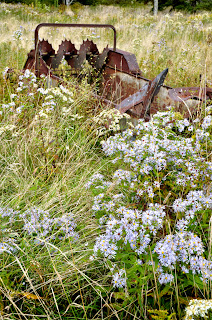 First day and the Cobscook Bay area was preparing for a squall.  Heavy rains were expected later in the day but the morning offered some lovely filtered light.

The temptation is to run to the edge of the sea.  To see the elements that make Maine so world renown...the rugged rock strewn coast...the lighthouses in the fog.  It is so easy to look beyond your own backyard but I found that there was a wealth of beauty very near to hand.

I photographed this"remnant" in the landscape right behind the house.  It had a wonderful rusted surface that contrasted beautifully with the glorious asters that filled the fields on both sides of the road.

It is a bit early for the shocking Autumn colors Maine is noted for but the subtle hues of early fall were almost ethereal.  The grasses turned to pale wheat tones and along with the asters it was breath taking.

Honestly, I thought the field below, which is directly across from the house we are staying in, was one of the most beautiful sights I've seen so far.  The filtered light offered just the right amount of contrast and the blue and white asters were alive with bees. 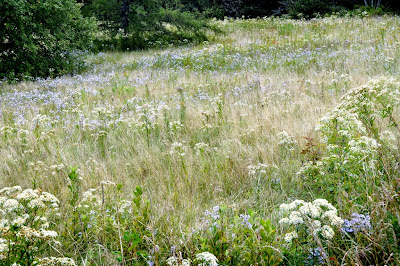 I promise to photograph the rugged Maine coast later in the week but on this first day, that later turned out to be "blowing a gale" with rain pelting in at right angles, this brief moment before the storm was heavenly.

The approaching squall turned the heavily clouded sky a gorgeous deep blue that, along with the soft hued yellows and reds, was  really striking. 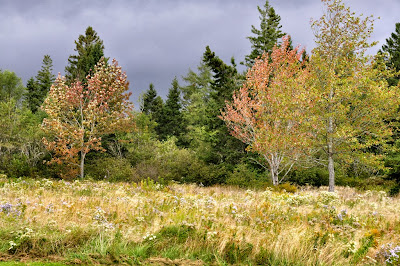 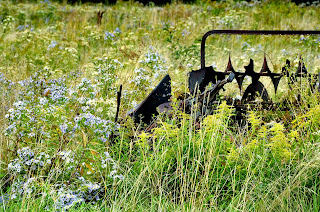