The Photographer as Poet...

"If I could tell the story with words
I wouldn't need to lug around a camera."
Louis Hines 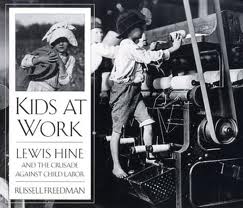 "A picture is worth a thousand words."  How often have we heard that said!  In this post I want to explore the idea of poetry making through photography.  The idea of deliberately creating a sequence of images that can be "read" by the viewer...a poem without words.

The first distinction I would make is between a "series" and a "sequence".  While both are a collection of images, the first revolves around a theme or one specific idea and the second is a development of a poetic response to an idea.  It has, like poems, a beginning, a middle and an end...a sequential development.  A series, most often, can be viewed in any order; each image a variation on the theme whereas a photographic "poem" must be read in the order the artist intended.

I guess the next distinction I need to make is between "story" and "poem".  What sorts of stories do photographers tell?  Well, that would depend on what kind of photographer you are.  The photo-journalist/documentary photographer may focus on a political or environmental issue.  He starts with the idea and seeks out photographs to illustrate that idea.  Louis Hines' photographs of child labor in the factories of the early 20th century tell a poignant and heart-wrenching story.  You certainly don't need words, the pictures are all the "text" you need but, in fact, volumes were written when his photographs became known.  There will always be a place for the photo-journalist in the world.  There are so many stories that need to be told but as a contemplative photographer I want to explore the poetic capabilities of the medium rather than the documentary.

Now, everyone is familiar with the idea of using a photograph to illustrate a poem.  The words come first and then the image.  Sometimes the poet is the photographer and sometimes it is a collaboration.  What I'd like to suggest is an approach that allows the images to come first...sequenced by the photographer...and, this is a bit of a departure, presented without words, as a kind of "open-ended" poem.  The images are meant to be illuminations rather than merely illustrations...illuminations of a central idea or quotation but with the photographers orchestration of sequence.  The viewer, whether the photographer herself or someone else, writes the poem in a "Lectio Visio" (visual meditation/reading) exercise...one sentence for each image.  I wrote a post, "Photo Lectio - the image as icon"-May 16, 2012, that suggested that the individual image could serve as a catalyst for introspection and contemplation.  This post takes the idea one step further.  The sequence of photographs, the Photographic Poem, becomes a collaboration between the photographer and her audience. Each time the poem is "read" it can generate a new response.  Each person will bring their own interpretations to the sequence.

I created a visual poem on my walk to Two Boulder Hill in Concord, Massachusetts in November.  This is a walk Henry Thoreau made in 1860 and a walk I will take in April with a group of photographers interested in learning more about contemplative photography.  I thought it would make an interesting sequence...my first photographic poem!  (A disclaimer here...I'm no poet but I love the idea of a "poetic sequence".)  I've captioned each image and entered my first poetic response.  If anyone would like to offer their responses I will be happy to add them...a kind of photo poem round robin! 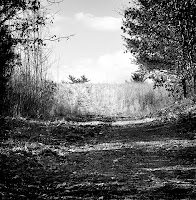 The Approach to Crockery Field


From a darkened past we seek the light... 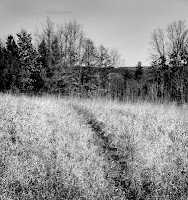 The Narrow Path Across the Field


... that will take us safely through. 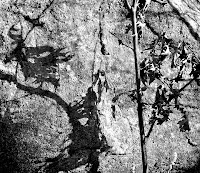 
What transient shadows cross our path? 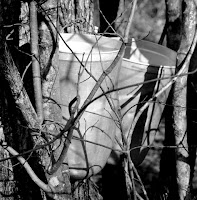 What have we left behind?

Well, it's a start.  I will mull this over and see what new ideas present themselves.  I see this as an "open ended" process.  The little poems are just another way to use my photographs as a contemplative practice.  Try creating your own poetic sequence and see where it leads!
Posted by Patricia Turner at 8:21 AM

What a wonderful idea... your post has sparked a multiverse of creative possibilities!