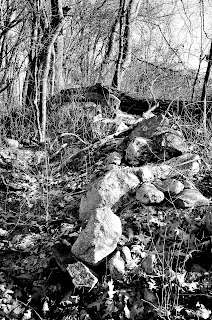 As bad as my first attempt at a photographic poem was in my last post, it actually gave rise to a whole new idea for a photographic series..."things we leave behind" or Remnants.  It got me thinking about the transient nature of human efforts.

On that same walk to Two Boulder Hill, I saw several examples of human constructed "remnants", like this old dilapidated stone wall.  It probably was constructed in the early 19th century by the farmer who owned this land.  New England is criss-crossed  by thousands of miles of stone walls.  Created to define a property line or field they were constructed with stones cleared from their farmland.  My grandfather always said the best crop New England grew was stones!  Every Spring the frost would faithfully heave up new ones.  Clearing stones from ones property was an endless chore.


Also on the walk that day we saw an old, disused concrete bunker of some sort, a derelict paved road, an old rusted chain-linked fence enclosing...well, it was hard to say.  All these things were made for some purpose but then abandoned and left for Mother Nature to reclaim and she was well on her way.  This would make a fascinating series!  The New England landscape is littered with these remnants of our past becoming left overs in the landscape.  So, my first foray into a poetic sequence yielded an unanticipated reward...a new photographic project!  You see, you can never tell where the path you are on will lead you but I've found that if I follow my heart I will always end up someplace interesting, just like Alice.... 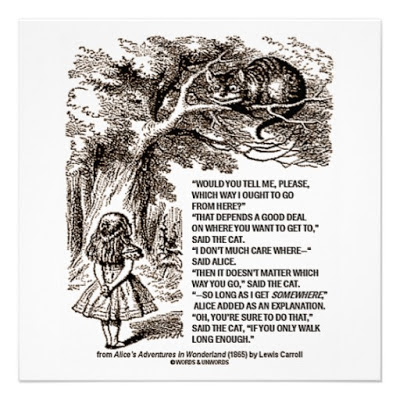 Posted by Patricia Turner at 12:40 PM