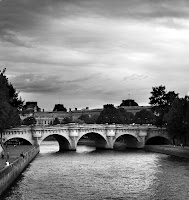 Two days before I left France I had, for the second time, the opportunity to become a Flaneur, a wanderer on the streets of Paris. The first time I wandered in Montmartre, the artist's district in Paris and the home of the Sacre Coeur Bascillica.  I do believe it is not only the best way to see Paris, it's the ONLY way to see this amazing place.  On my second day of "flaneuring", I wandered the streets of the Left Bank in the area of the Latin Quarter.  I made several photographs that I was pleased with during my meanderings and I want to share them with you in two parts.

The first is a view of the Seine.  Though the sky was mostly grey during my wanderings it did, on occasion, lighten a bit. I love the light in the sky and on the water and the way it illuminates the bridge. As I mentioned previously, I focused my attention on the play of light and shadow while I was in France and this was a nice example of its luminous qualities. 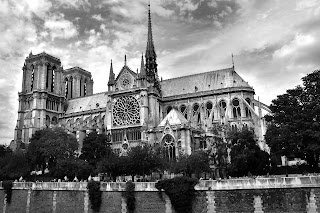 Being on the Left Bank gave me a stunning side view of Notre Dame.  Much nicer than the first view I had of it a few days earlier when I fought my way through the souvenir hawkers and throngs of tourists on the plaza in front of the cathedral.  I could appreciate the rose window and flying buttresses from this side.  (For those fascinated by the construction of these medieval masterpieces, as I am, visit this Nova site and  you can watch a video on their construction.) 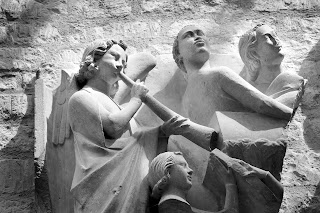 The Museum of Medieval Art (also known as the Cluney) is one of those rare gems on the Left Bank that many tourists never get to.  I was enchanted by the art and especially the Lady and the Unicorn tapestries. I could have spent a whole day there!  After I parted from my friend, I went back to spend a bit more time with the art.

I photographed a lot of sculptures in France...I couldn't help myself.  The light was radiant and I was captivated by the gentle faces. In contrast to the frantic pace of the trip, they seemed so serene and peaceful. Sometimes you are drawn to photograph what you most need at the time.

Shakespeare and Company is a very famous English language book store on the Left Bank.  It first opened in 1919 and it played host to the likes 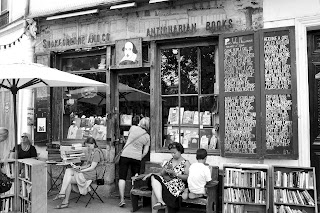 of Hemingway and Joyce. It closed in 1942 with the Nazi occupation.  It re-opened in 1951 in it's present location under a new owner who, thankfully, has stayed true to its Bohemian antecedents. It still houses aspiring writers in the rooms upstairs and it is a mecca for anyone who loves literature and the charm of old bookstores.

While I was there I picked up a copy of Susan Sontag's book "On Photography" and it is a fascinating read.  I'll most likely be writing a few posts on it in the future.

Next door to the bookstore was a wonderful cafe where I took a break from my wanderings to sip an iced cafe au lait and start my book.  I will continue this narrative of my day in my next post which I hope will be in a few days. (I plan to post twice a week now.)  Frankly,  I would have been content with what I'd seen to this point but it seemed that even more amazing experiences were yet in store for me.....

Posted by Patricia Turner at 1:10 PM