Moving Beyond the Picturesque...

In the late 18th century, William Gilpin coined the phrase "picturesque".  It was a time of romantic revival in literature, poetry and painting and tourist flocked to these so-called picturesque locations all over Europe in order to ponder the sublime beauty of remote landscapes.  Some also brought along "Claude glasses", named after the French painter Claude Lorrain ( you can go here to see the artist's work.) who was noted for his romantic, smokey landscapes.  These devices framed and tinted the landscape so the viewer saw it not as nature but as a painting.  That is what picturesque means - in the manner of pictures - fit to be made into a picture or painting. 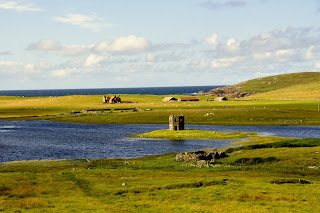 This was also the time when landscape designers added "follies" to the gardens of wealthy clients so that the vista could be considered more picturesque.  Somehow, these man-made elements added beauty the natural landscape lacked.  Faux Greek temples and Egyptian obelisques came to dot the English countryside of the great 19th century estates.   I made the photograph on the left on North Uist in the Outer Hebrides of Scotland.  This faux tower was created by the lord who owned the land to enhance the vista.

I think many photographers are stuck in this mode of thinking as they go out to photograph the world around them.  Like the tourist of the late 18th and especially the 19th century,  they go in search of the picturesque - landscapes that they feel are worthy of being photographed.  This implies that there is an abstract and universally agreed upon criteria for this kind of picture making and I must admit to feeling its pull from time to time.  If we are honest with ourselves, we all do.

The biggest shift in my photography came when I realized that my images could have another role to play - beyond the picturesque.  They can also have a revelatory function and they need not be "pretty" at all to fulfill this function.  In fact, sometimes the most ordinary, the most mundane, can be the most revealing.

Now I want to be clear, I'm not opposed to the beautiful and sublime landscape.  Basking in the beauty of these places is both theraputic and wonderfully uplifting.  I simply want to point out that to really call ourselves contemplative photographers we must also be willing to delve into the neglected, the abandoned, the "unpicturesque" locations because they hold their own kind of truth and revelation.


Posted by Patricia Turner at 7:13 AM