"Art enables us to find ourselves and lose ourselves at the same time."
Thomas Merton
I had known of Thomas Merton long before I picked up the camera again in 2005. A Trappist monk, "Father Louie"  was a 20th century mystic and poet. His book, "The Seven Storey Mountain"(1948) is considered one of the great  works of literature of the 20th century. It was through this book, in a comparative religion class in college, that I first got to know of Merton.  He conferred with the Dalai Lama and other world leaders. He was  most concerned with issues of social justice and inter-faith understanding. He became deeply interested in Eastern philosophy and was at a conference in Bangkok, Thailand to promote dialogue between Eastern and Western monks when he died, at the age of 53, in a tragic accident. All this I knew but I had no idea that he was also a photographer!
I suppose Merton's photographs would be considered by some as a bit "unpolished", technically speaking. He was, after all, untrained and he had only practiced photography for a few short years before his untimely death.  But what his photographs may have lacked in technical perfection they more than made up for  in their purity of vision.  Merton was a true contemplative who saw divine presence in the natural world. For him, Nature was the perfect metaphor for the inner journey of the searching soul and he was able to beautifully photograph those metaphors. I consider him, like Minor White, a kind of mentor for the contemplative photographer who is searching for more meaningful and personally rich imagery in their own work.

I recently discovered a book of Merton's photographs; "The Geography of Holiness".  Published in 1980, the book contains photographs made by Merton in locations around the world.  It was an inspiration.  Here in his simple black and white images, like the Trappist habit he wore, were meditations on the divine...the holiness of all created things. Father Louie came late to the world of photography and only followed a  photographic path for a short time but in that time he created some memorable images.  The lesson here is that technical  expertise doesn't necessarily  make a great photographer, soulful self-searching does.  Merton's work also demonstrates the value of photography as a contemplative practice...a practice anyone can take part in.  Photography needn't be an exclusive club for those with expensive equipment and the latest Photoshop program. It is the most democratic of mediums. It is one of its greatest strengths to my way of thinking. 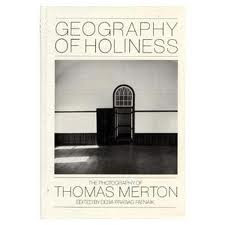 I often think that some photographers pursue their imagery like a flat stone that skips across the surface of the pond.  Never resting but jumping from one spot to another, they see only the most superficial elements of the landscape.  I confess that in the beginning I too was guilty of this sporadic and superficial approach. I was always in such a hurry...afraid I might miss something!  Merton would be more like a heavy round stone which is tossed in a grand arch and drops with a gentle splash into the water. It sinks to the bottom and stays still, looking at the pond from the inside out. I have tried to become more like that heavy stone when I photograph.  I am now content to rest at the bottom and observe the landscape, and life, from the inside out.

This post and the previous one on Minor White present a bit of a riddle, like the old "chicken and egg" one.  Which comes first, the photography or the contemplation?  These two men illustrate the answer, BOTH!  I have to admit to being in the Minor White group...I learned my photography before I discovered contemplative photography but it matters not a bit which way you approach it; what matters is whether it suits your soul as an artist.  Not everyone is cut out to be a contemplative photographer and isn't it wonderful that there is a place for every kind of photographer in this world!

I recently started reading Merton's books. I'm really happy to have found your blog posting and your website!

Thank you Bret! Enjoy the journey!